For the first time in nearly a decade, Guilford County Schools’ elementary and middle school students scored higher on state tests in every subject and at every grade level in 2019, according to results released today by the North Carolina Department of Public Instruction.

“The numbers are proof that the strategic investments our Board of Education has made in curriculum development, instructional materials and supplies, and powerful professional development for our educators are paying dividends in the classroom for all students,” said Superintendent Sharon L. Contreras. 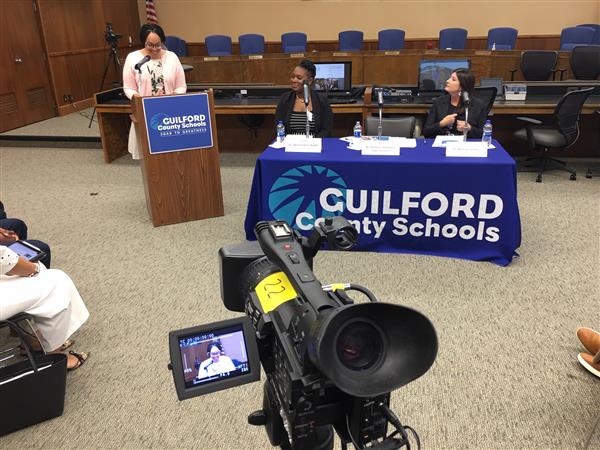 Grade level proficiencies increased across the district in English Language Arts/Reading in Grades 3-8 from 52.2 percent in 2018 to 55.5 percent in 2019. The largest gains occurred in fourth and sixth grades. 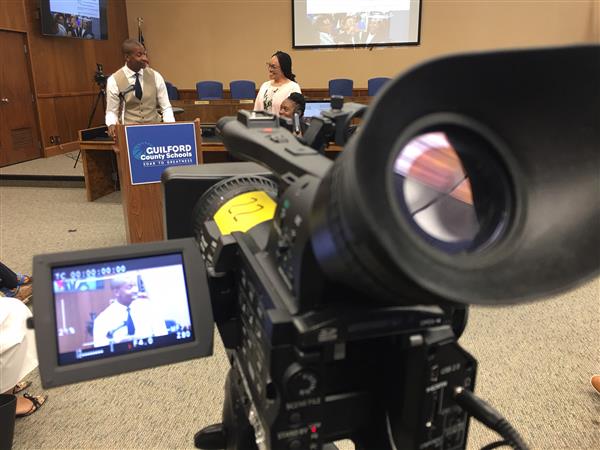 Students posted the most significant gains in science in grades 5 and 8, with grade level proficiency rates going from 66.7 percent in 2019 to 72.4 percent in 2019. Students in grade 5 posted a 4.9 percent point increase, while students in grade 8 posted a 6.5 percentage point gain. Hispanic students had the largest gains in science scores with a 10.2 percentage point gain, followed by black students at 7.1 percent.

The GCS graduation held steady at 89.1 percent, placing GCS higher than four of the five largest districts in the state of North Carolina. Ten GCS high schools posted perfect graduation rates, with 100 percent of all freshmen who entered the school in the fall of 2015 graduating within four years.

High school measures in biology and English II decreased slightly, but remain above 55 percent. The state is calculating Math 1 differently this year in alignment with federal guidelines.

As a result, scores for middle school students who are advanced enough to take Math 1 (a high school level course) are no longer counted as part of a high school’s proficiency measure for accountability purposes.

For districts like GCS, which encourages students to take Math 1 in middle school so they can tackle calculus and other advanced math courses prior to graduating high school, the formula change is having a dramatic impact.  For example, with advanced middle-school students’ scores no longer counted, GCS’ high school grade-level proficiency on the Math 1 End-of-Course (EOC) exam (formerly known as Algebra I) dropped to 27 percent.

The state used a new assessment for Math 3 in 2019, which is also included in high school’s overall proficiency rate calculation for the first time. GCS’ proficiency rate on the new End of Course (EOC) test was 46 percent.

Despite these challenges, GCS reduced the number of state-identified low-performing schools from 42 in 2018 to 36 in 2019. More than 34 percent of GCS schools earned an A or B school performance grade in 2019 as compared to 31.9 percent in 2018. The number of C schools increased slightly to 31.1 percent from 29.4, while the percentage of D or F schools decreased from 38.7 percent to 34.5 percent.

This year, 73.5 percent of GCS schools met or exceeded growth in 2019 as compared to 74.2 percent in 2018, although this percent mirrors the state.

In North Carolina and nationally, research indicates that student performance on standardized tests correlates most closely to family income. In GCS, more than 71 percent of all schools have student poverty rates of 50 percent or more. Approximately 64.8 percent of all GCS students are considered economically disadvantaged.

“This is a generational problem that is going to require school partnerships for things that occur outside of our school district such as access to food, healthcare, transportation, the environmental burdens they face and the housing issues they deal. All of those burdens show up at school. Our educators are not just teaching and learning, they are addressing all of those needs as well,” said Board of Education Chair Deena Hayes.

To access the media briefing report, click here. Click here to read more about the changes in the accountability system North Carolina has made in response to the federal, Every Student Succeeds Act (ESSA). To read the letter GCS Superintendent Sharon L. Contreras sent to the State Board of Education regarding growth measures, click here.