Aaron Spruill knows his way around almost any engine.

His grandfather and uncle taught him everything he knows. His grandfather drove trucks before he retired; and his uncle, a diesel mechanic, works on all kind of motors.

Meanwhile, Aaron grew up around tractors and skid-steer loaders. He can run most anything, from a bulldozer to a backhoe. And he got started early.

Then there was that one time when Aaron was 3, and his grandfather had to do something quick. He turned off the tractor, jumped off and left Aaron in the seat to wait.

He cranked up his grandfather’s tractor and started driving away. His grandfather took off running when he saw the tractor riding away with Aaron behind the wheel. He jumped on the tractor, turned it off and got all kinds of angry at his grandson.

“He’s told that story plenty of times,” Aaron says. “He told me not to touch anything. But I couldn’t. That’s not who I am.”

Aaron graduated this month from Northwest Guilford High. He already owns his own landscaping company. He now wants to own his own dump truck company.

That idea arose from how he grew up – around all things big and mechanical.  He worked on lawnmowers with his grandfather and took what he learned to four-wheelers and dirt bikes, cars and tractors.

He also has good grandparents.

JC and Dot Spruill have raised Aaron since he was three months old. Their son and Aaron’s mother couldn’t handle taking care of Aaron. So, the Spruills took over and later adopted him. 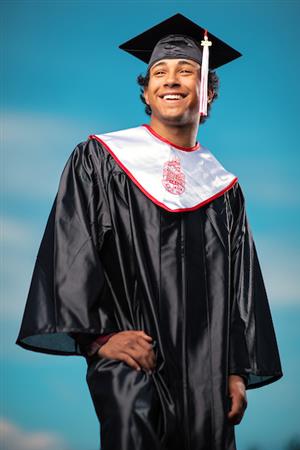 Aaron doesn’t see his mom. He sees his dad, as he says, “every now and then.” He looks to his grandparents as his real parents.

His grandmother used to take him to the local Food Lion or the Bi-Rite in Stokesdale. Then, he’d get home, sit at the counter in her small kitchen and watch.

His grandmother was a magician in the kitchen, and today Aaron can rattle off quickly the favorites his grandmother made -- banana pudding, pound cake, spaghetti, sweet potato pie and cornbread, the family’s favorite.

“I’ve watched her cook cornbread,” Aaron says. “But I haven’t nailed that one down yet.”

Like they did with Aaron, the Spruills also took in Logan Spruill, Aaron’s half-brother. Aaron and Logan have the same dad.

Logan was 10 years younger than Aaron, and he was newborn when he came to live with the Spruills. His grandfather built a sandbox so Logan could play with his toy cars, toy dump trucks and toy excavators.

Meanwhile, Aaron built a relationship so Logan could feel at home.

Like his grandfather did for him, Aaron would take Logan for rides on the lawnmower and their grandfather’s tractor. They had what Aaron calls “brotherly love.” And like brothers, they fought.

“He would take something of mine, or he’d want some food I had and try to take it,” Aaron says. “He also would love running away from me. He’d get me agitated over something, and he would take off running. He thought that was the funniest thing in the world.”

Logan was autistic, and he couldn’t communicate well.  When he was younger, he could only point. But in the fall of 2018, when he started kindergarten at Colfax Elementary, Logan began to learn how to communicate better.

Still, though, he loved to run off. He would slip out of his bed or he’d be outside with Aaron and his grandparents, and he’d sprint toward the woods behind their house.

One time, Aaron’s grandmother was up the street looking for him when a neighbor, a detective for the High Point Police Department, picked him up and brought him home.

Another time, Aaron’s grandparents called the police when he took off barefooted. The police and search dogs came, and Aaron’s uncle found him walking out of the woods a good way from the house.

Aaron had just come home from Northwest High when the police arrived. A search helicopter flew above, and everyone looked for at least four hours.

Finally, police found Logan. He was a 20-minute walk away through the woods. He somehow had fallen into a pond and drowned. He died two weeks after turning 7. 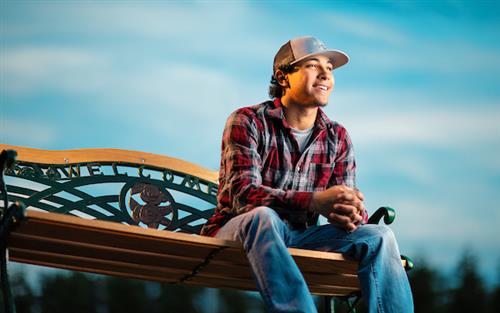 “It’s been the hardest thing I’ve ever faced,” Aaron says. “I’ve lost family members and stuff, but Logan was the closest family member I’ve lost. He was my little brother. Learning was harder for him, but he was starting to learn pretty good, and it made me proud.

“I wanted to watch him grow and learn things and be OK, and I thought one day, he would grow out of this and be OK.”

Logan is buried at the cemetery in front of Oak Springs Missionary Baptist off U.S. 158.

Aaron doesn’t visit Logan’s grave very often. But he thinks about him every day.

One time, he was working on a lawnmower engine and a Granddaddy long legs crawled across his arm. Aaron swept it off his arm, and he couldn’t help but think of Logan.

So, as he details cars at Kernersville Dodge in between his landscaping jobs, Aaron is working on his next move of owning a dump truck company. When he does, he knows who will be looking out for him.

“He’s in a good place now, and he doesn’t have those problems, and he’s happy,” Aaron says. “He’s watching everybody down here. And he’s watching over me. I want to make him proud.”