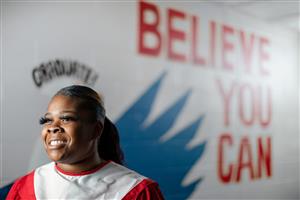 She graduated Sunday from T. Wingate Andrews High and will head to college where she wants to major in criminal justice.

She wants to go to High Point University, and she’s got some scholarship money. But she needs more funds to make it to HPU, and everyone from a school counselor to the principal at Andrews High is working to make that possibility become a reality.

Andrews would do that for any of their students. But school officials know Armani has overcome much to get this far. As for Armani, she knows she has to keep going.

Her persistence, she believes, keeps the memory of her mom alive.

A Tragic Day in DC

It was the last Friday in September 2016, and Armani needed to catch the bus.

“Bye, bye, Mom, I love you,” she hollered as she headed toward her apartment door.

Armani woke up late, and she worried that she’d miss the 7 a.m. city bus that would take her to Friendship Public Charter School in Washington, D.C. So, she skipped breakfast and jumped into her school uniform, a royal blue collar shirt and khakis.

“Momma, I’m leaving!” she hollered again, throwing her backpack over her shoulder.

Armani heard nothing, and she stopped. 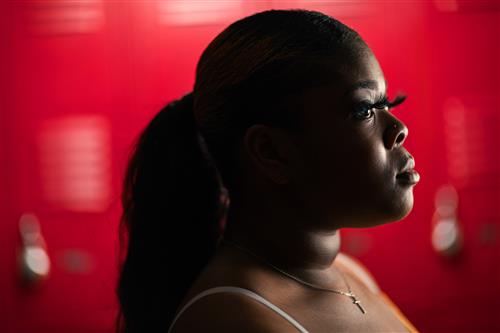 That wasn’t like her mom, Mary Brown. She always said goodbye. So, Armani turned around and walked into her mom’s bedroom. Not a light was on. Armani saw her mom lying  on her stomach.

A few weeks before, her mom had suffered a stroke that stole her ability to speak. She was at home when she called Armani at school and said, “Mani, you need to rush home. I can’t breathe!”

Her mom spent a week recovering in the hospital. Since then, Armani had been helping her mom with her speech. She’d use notecards, writing down lyrics from hip-hop and R&B songs, and have her mom repeat them back to her.

Armani, an eighth grader at Friendship Charter School, stayed positive. She told herself that her mom would be OK, and she knew she could help her mom get better so she could continue taking classes at a local community college to get her associate degree.

That all changed on Sept. 30, 2016. The night before, Armani and her mom had a conversation at 10:35 p.m. The next morning before daybreak, she found her mom lying face down on her bed.

“I need help,” Armani said to herself.

Armani called 911. She told the operator about her mom’s stroke a few weeks before, and she believed her mom simply passed out.

Minutes later, paramedics arrived. They walked in her mom’s bedroom, and Armani walked out. She wanted to stay away, keep positive and keep telling herself, “I hope she’s OK. I know she’ll be OK.”

After a few minutes of checking her mom’s vital signs, a paramedic found Armani in the kitchen and asked for her to call an adult relative. Armani called the number of Falan Brown, her sister-in-law who lived in Greensboro. She then handed the phone to the paramedic.

“Yes, ma’am, I have some bad news,” the paramedic told Falan. “The lady at this residence has passed.”

Armani was 13. Her mom was 51. For the first time in her life, Armani was alone.

“I was in shock,” Armani says today. “I really couldn’t think properly. Everything was running through my head, and I kept saying to myself, ‘Where am I going to go?’ All I could think about was that I was going into foster care.”

After the paramedic handed the phone back to Armani, Falan had a message for her young sister-in-law. 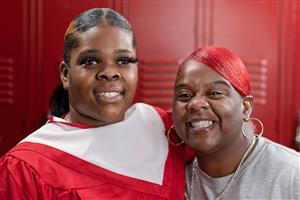 Armani was first taken to downtown Washington to Child Protective Services. She sat in a room with a TV going. She doesn’t remember what was on. She just sat there, still in her uniform from Friendship Charter School.

After a few hours at Child Protective Services, Armani was taken to a neighbor’s apartment on the same fourth-floor hall where she and her mom lived. The neighbor was one of her mom’s good friends. There, Armani waited for Falan and her brother, Brandon Brown, to arrive.

When they arrived, Armani hugged them both. Within minutes, they headed back to Greensboro. They arrived at midnight, and Armani was emotionally spent. But she felt safe. She had returned to her hometown, the city where she grew up.

She was thankful. Still, what to do next. 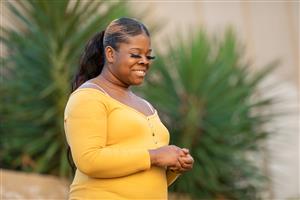 “It was OK, but I didn’t talk to anybody,” she says. “I kept to myself. What had happened was nobody’s business, and nobody asked.”

The one person she leaned on was Falan.

“I talked to her about how she was feeling,” says Falan, a 38-year-old mother of five and a certified nursing assistant at a home healthcare agency in High Point. “And once I got her enrolled in school, I did what any normal parent does. I made sure she was bathed and clothed and fed, and we talked about whatever. I did what I would do for my own kids.”

“She’s played a big role in my life ever since she came to get me in 2016,” Armani says. “She helped me cope by understanding my feelings. She told me to talk about it rather than holding it in.”

At Andrews High, Armani became more outgoing. She became a cheerleader and a member of the school’s track and field team. She threw the shot put. Meanwhile, she kept her grades up because she remembered the wish her mom had for her.

To graduate from high school.

To go to college.

To create a life her mom longed for her.

Last Sunday when she graduated from Andrews, Armani had a photo of her and her mom taped to the top of her mortar board. But Armani didn’t get to that big event in her life without enduring another family tragedy.

It happened on a Monday in November, less than three weeks before Thanksgiving. She awoke to her nephew screaming, “Get out of the house! Run!”

It was around 7 am. She looked out her bedroom window. She saw flames. 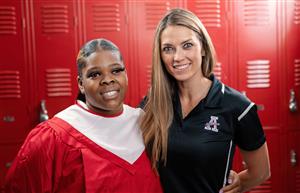 On Nov. 9, 2020, during an early-morning thunderstorm, faulty wiring started an electrical fire in the home Brandon and Falan Brown rented.

Armani ran out of the house and stood in the front yard barefooted, in her black shirt and orange and black shorts. As she stood in the pouring rain, she saw a fire engulf the back of their house.

Once again, out of seemingly nowhere, tragedy had struck.

Back at Andrews, guidance counselor Adrienne Hagerman heard about the fire at Armani’s house and immediately jumped into her car. The whole way to Armani’s house, she kept saying to herself, “This can’t even be real?”

She and Armani had grown close. For months, she had been working with Armani about getting into college, and she had Armani apply for scholarships and fill out all kinds of paperwork to defray the costs of college.

Hagerman does that with all college-bound students at Andrews. But she knew Armani’s story. Armani would come into her office and talk about her mom, her life and her college dreams.

So, when the global pandemic closed schools everywhere, Hagerman kept in touch with Armani. Then came that Monday in November. For Hagerman, it felt too surreal.

“I cried,” Hagerman says today. “I kept thinking, ‘What a nightmare! How can this be happening to this girl?’”

When Hagerman arrived, she saw Armani and her family standing on the front porch to escape the rain. Firefighters had extinguished the flames, but Hagerman realized right away the family had lost everything.

“How can we make this OK?” Hagerman asked herself.

Hagerman and other school officials went into problem-solving mood. They bought groceries for the family, and the principal, Dr. Marcus Gause, began looking for a place where they could stay for free for a few weeks until the family found a new place.

Back at her office, thinking of what else to do, Hagerman wanted to check on Armani’s first choice for college: High Point University. It was the only school Armani applied to because she saw that as her dream school.

Hagerman called and got the word. She then called Armani back two hours after the fire. She caught up with Armani in a hotel room the American Red Cross found for them.

It was two hours after a fire destroyed their rental house, and like when her mom died, Armani was trying to figure out what to do next.

“I know this isn’t the best time, but I wanted to let you know,” Hagerman told her. “You got accepted into HPU.”

On the day Armani ran into tragedy once again, she found hope. 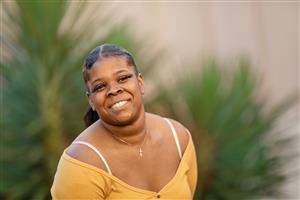 Armani will receive a scholarship from Say Yes Guilford, the local nonprofit that helps local college-bound students. But it won’t be enough for Armani to attend HPU.

So, Andrews has set up an account at a local credit union to help raise the rest of the money Armani needs to attend HPU.

“This is what we would do for our students,” Hagerman says, “and with everything Armani has been through, we can’t let her down.”

Officials at Andrews High are hopeful. Dr. Gause found the family a house –– a parsonage of a local church in Jamestown –– after the fire. Armani and her family stayed there three weeks until they found another home to rent near the school.

So, with the creation of the Red Raiders Scholarship account, Gause, Hagerman and others at Andrews remain optimistic.  So do Armani and her sister-in-law, the woman she calls “Mom.”

“This will help her pursue her dreams and sets an example for the younger kids under her,” Falan says. “That if you work hard, your hard work pays off.”

With whatever happens, Armani feels she has made it. She has fulfilled her mom’s wish –– and her own.

“I’ve been waiting for this for a long time,” she says of graduating from high school. “I’ve been through so much, and I know I can hold my head up, and I’ve been strong through some tough times. I made it. I didn’t fall off.”

You can make out a check to the “Red Raiders Scholarship” and send it to the High Point branch of the Truliant Federal Credit Union. The address: 4006 Mendenhall Oaks Parkway, High Point, NC, 27265. In the subject line, put “For Armani McKellar” or the account number 400053430777.

Or you can download the Cash App and send a donation to “$RedRaiderScholar.”