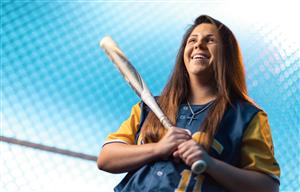 In her bedroom, Alexis Oxendine keeps 28 trophies, 16 medals and nine military-style dog tags from her eight years of playing softball.

“It makes me smile, especially because of all the stuff I’ve been through,” she says. “It shows what you can earn when you work hard.”

Alexis graduated Monday from High Point Central High and starred on their softball team all four years. She played third base and pitched four shutouts in her four years at High Point Central. This year, she achieved a first. She made All-Conference.

She sure does. This summer, she’ll help coach 14- and 15-year-old ballplayers in High Point. She then plans to enroll in GTCC this fall to get a few courses out of the way before she transfers to UNC-Greensboro.

UNC-Greensboro has a good softball team, too.

Alexis is looking forward to the next chapter of her life. But she can’t help but look backward and think about how far she’s come.

She wasn’t supposed to live to her first birthday. At least, that’s what the doctors told her mom.

A Mother Grows Up

Alexis was eight weeks old when her mom, Amy Davis, noticed the yellow tint of her skin.

The news was bad. Alexis’ liver was failing, and she needed a transplant.

Doctors referred Alexis to the Duke Children’s Hospital and Health Center in Durham.  Alexis’ medical odyssey began. She started going back and forth to Duke for tests to prepare her for a transplant. But she needed a donor, and doctors found one close.

She and her mom laid side by side, inches from one another. The pediatrics team operated on Alexis; the adult team operated on Davis. Doctors removed 20 percent of Davis’ liver and transplanted it into her daughter.

The surgery took all day. It saved her daughter’s life.

“I prayed hard,” Davis says today. “I knew we had to take care of it and do what was needed to keep her alive.”

Davis was 18 when Alexis born. She had graduated from T. Wingate Andrews High the year before, and she was working as an office manager at Food Lion, raising her daughter with her boyfriend, Jody Oxendine, Alexis’ dad.

Then came the need for Alexis’ liver transplant.

“I had to grow up quick,” Davis says.

Davis drove Alexis back and forth to Duke. After the transplant on Nov. 20, 2003, Alexis stayed at Duke until the day before her first birthday. In her room, always, was her mom.

Alexis had three more surgeries before she came home for her birthday on Jan. 7. Davis bought a Winnie the Pooh sheet cake from Food Lion, decorated with four words Davis longed to see. 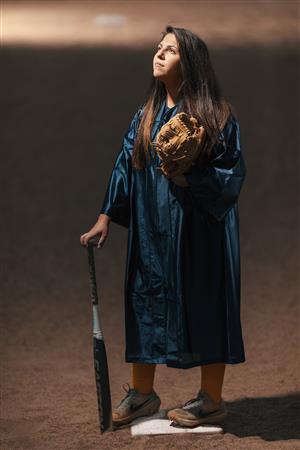 When Alexis came home from the hospital, she was taking 13 medications. Today, she takes two. One is an anti-rejection drug; the other is to treat an inflammation in her stomach.

Doctors tell Alexis she will eventually need another liver transplant. Right now, she has gone to Duke every three months for the past three years for blood work and more tests.

Those procedures take all day.

“With all that she has to go through with those multiple trips to Duke, I’m proud of her,” Davis says. “When she misses an assignment, she’ll ask her teachers, ‘What do I need to do?’ She doesn’t miss a beat. She knows grades comes first, and she strives for excellence in everything she does.”

When Alexis steps onto a softball field to play, she wears a back brace for protection.  And whether she’s pitching or playing in the infield, she sees around her a sea of teammates, both at High Point Central and her travel team.

“Travel ball is different than high school ball,” she says. “You get to go out and eat with the girls and stay in a hotel, and you make sisters for life. They always have got your back.”

Alexis first tried softball when she was 5. She got hit in the head with a ball. She came back to the sport five years later. She was a fifth-grader at Shadybrook Elementary and she began playing slow pitch near her house. When she got a hit, she skipped around the bases.

What a difference eight years make.

The Power of Practice

Alexis now plays fast pitch, and she has played with High Point Central, High Point Recreation and a dozen travel teams with names like Shock and GBC Elite.

She has played as many as 10 games during a weekend tournament with one of her travel teams, and she has felt the rush when her teammates converged on the mound at the end of a game to hug her.

When that first happened, she was a freshman at High Point Central, and she pitched her first shutout at a tournament an hour south in Concord. That was when she earned her first of nine dog tags signifying excellence in softball.

“All the girls threw their gloves in the air,” Alexis says. “We were all so excited.”

Alexis wasn’t a natural pitcher. She was 12 when she got the itch to fast pitch. During her first practice with her stepdad, Joe Robinson, she stood on the mound at a local ballfield and slung her ball toward home plate.

Her pitch sailed over the backstop.

“You got it next time,” her stepdad told her, laughing.

After that, Alexis spent every single day for six months working on her delivery. She fast pitched at a local ballfield. Then, her stepdad built her a mound in her backyard, and she practiced with him and her friend, Emily Roumillat.

When no one was around to catch, Alexis practiced by herself. She would stand on the mound and pitch a softball toward the middle of a tire hanging no more than 42 feet away.

Alexis improved. She now stands on the mound, focusing on the small point in her catcher’s glove and goes over a checklist in her mind.

“You have teammates behind you.”

“Your job is just to pitch.”

Alexis is no longer the five-year-old scared to step into the batter’s box after getting hit the head.

“I like to put myself into situations to see how I can improve and get better,” she says. “If I get hit or get a bruise, I shake it off.”

“I’ve got so many bruises.” 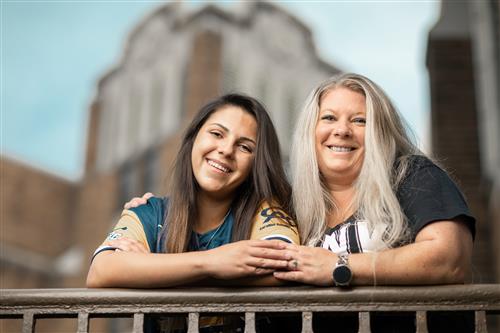 A month ago, Alexis got her eighth and ninth dog tag in softball.

It was Alexis’ first game of the day, and she was nervous. Alexis knew she never pitched well in the mornings. Plus, when she pitched, her grandfather would stand behind the backstop at home plate and critique every move of the granddaughter he calls “Lulu.”

But this time, her grandfather only stood an inning or two behind home plate. Alexis was doing well. GBC Elite won. Alexis pitched a shutout –– and a no-hitter.

‘There you go, Lulu,” her grandfather told her after the game, tapping her on her left shoulder.

Then, she talked to her mom, her dad and her grandmother on Facetime. She wanted to give them her good news.

Davis knows what softball has done for her daughter.

“Most of all, it’s a confidence booster for her,” says Davis, 36, a nursing assistant at Wake Forest Baptist Health – High Point Medical Center. “She started out skipping over the bases and not knowing how to play softball to making All-Conference. And when I think of how her liver is not in the best shape, softball has kept her grounded.

“She doesn’t dwell on medical issues. She concentrates on life and having fun.”

“She calms me down,” Alexis says of her mom. “She’ll say something funny, or she’ll tell me ‘It’ll be alright. We’ll take it one day at a time.’ I try not to dwell on it, and Mom, she settles me down. I look up to her. But when I think about what’s going on, like something at Duke, I’ll tell myself, ‘Oh yeah, I’ll get to play. I get to pitch.’”

For Alexis, that helps. Every time.