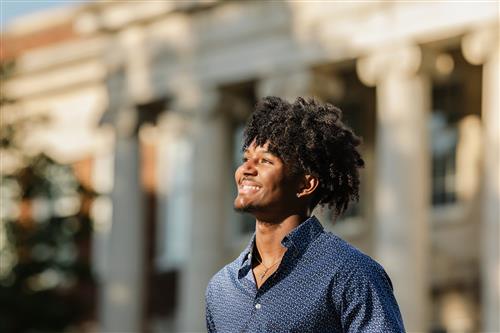 It was a Wednesday in February when Joey McGinnis IV sat in a gym at Southwest Guilford High and talked about the rest of his life.

He looked to his right, and he saw tacked to the table his football jerseys, No. 4 and No. 5.

He looked in front and saw his family, friends, his coaches, his former teammates and the eighth-grade basketball team from Southwest Guilford Middle, the school where his dad teaches technology. They all came out to congratulate him.

He looked to his left, and he saw on display all his old football photos dating back to when he first played all sorts of positions as a skinny second-grader for the Southwest Jets.

He had accepted a full scholarship to play football at one of the world’s best academic institutions, Carnegie-Mellon University in Pittsburgh. That achievement marries his dream of going to a great school, majoring in engineering, and playing the game he loves.

Joey made it. But how? Let’s start with Thor –– and Thor’s hammer. 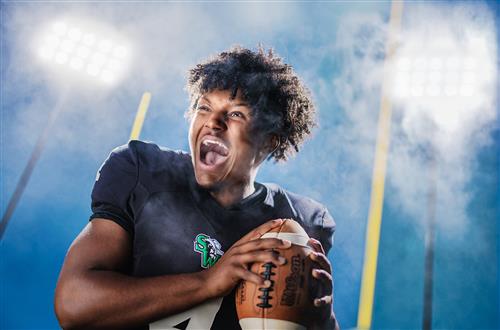 When he was 4, Joey picked up a football and started tossing it back and forth with his dad in the backyard. Joey found it to be odd-shaped, a bit weird. But somehow, that ball felt familiar to his tiny hands.

“I equate to Thor and Thor’s hammer,” Joey says today. “It was a perfect fit, like I was made to play this sport, to be in this activity. I mean, it was something different. As a four-year-old, you don’t know a lot, but I did know this. It was super fun.”

His dad, Joseph McGinnis III, became his first coach. Joey started playing flag football with the Oakview Upward Football at age 6. By the time he turned 8, Joey was playing tackle with the Southwest Jets. He played both cornerback on defense and running back and quarterback on offense.

His dad taught him how to throw. But he also taught him the importance of having discipline and employing a consistent work ethic.

As Joey got older, his workouts became more regimented. He and his dad, along with some of his teammates, would get up before sunrise on most weekday mornings and go through speed drills. They’d maneuver around cones and chairs at various fields nearby.

The more Joey played, the more serious he got. By the time he began playing at Southwest Guilford High, he changed his diet to gain more weight. He drank protein shakes and ate measured-out portions of chicken, fish, broccoli, and mashed potatoes.

He came into high school standing five-foot-seven and weighing 130 pounds. He could bench press 95 pounds and squat 120. 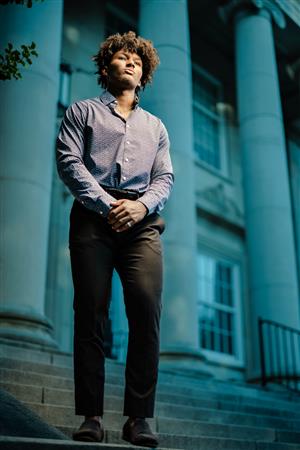 By the time he reached his senior year. Joy had grown to 5-foot-11 and weighed 190 pounds. He could bench press 240 pounds and squat 405 pounds.

He was going to summer football camps, getting attention of scouts, and working hard to be like the professional quarterback he kept on his iPhone save screen. That quarterback was Russell Wilson, the current quarterback for the Denver Broncos.

The summer before his senior year, while going through agility and speed one morning, Joey got a Zoom call from the football coach at the University of Rochester. The coach told Joey he liked the highlight film he posted on Twitter.

The Alabamas of Higher Education

Coaches from some of the best universities in the world began calling Joey. Yale and Dartmouth. Davidson and Harvard. Princeton and Brown, Carnegie-Mellon, and Massachusetts Institute of Technology.

They were the Alabamas of higher education. They contacted Joey because he was a good football player. But they also contacted him because of the excellent grades he earned at an excellent high school.

After attending a school fair when he was a student at Southwest Guilford Middle, he chose to attend STEM Early College at N.C. A&T. He went because he always wanted to be challenged, and he wanted to study engineering at a great engineering school like A&T.

But it was tough. Really tough. Joey found that out.

Sometimes, Joey studied until 3 in the morning only to get up three hours later to finish an assignment. But he didn’t struggle alone.

His parents supported him, and they made sure he got to school or practices at Southwest Guilford on time. His counselors and teachers at STEM Early College supported him and helped him balance his academic workload with his football schedule.

“It definitely was a personal journey and lots of trial and error where I had to adapt to the challenges I faced,” Joey says today. “But in the long run, that only made me stronger and made me a more well-rounded person.”

“When I was younger and something wouldn’t go right, I would lash out and pout over whatever the case may be,” he says. “But through good coaches, I was able to develop into the leader I am today. You learn how to remain calm with whatever you’re faced with.”

Joey faced a lot. At STEM, he took college-level engineering classes. He studied late and got up early. Meanwhile, he worked together with his parents, his coaches, and his fellow teammates at Southwest Guilford High and made the Friday nights in the fall memorable.

Now, he leaves that behind. On Thursday, at the Greensboro Coliseum’s Special Events Center, Joey will graduate from the STEM Early College at A&T with not only a high school diploma, but an associate degree.

Like with much in his life, Joey has a reason he went after that, too.

“I feel like down the road that would not only save money but catapult me into whatever career I wanted to choose,” he says. “I have two years of taking college classes at A&T, and that will only prepare me for my future.” 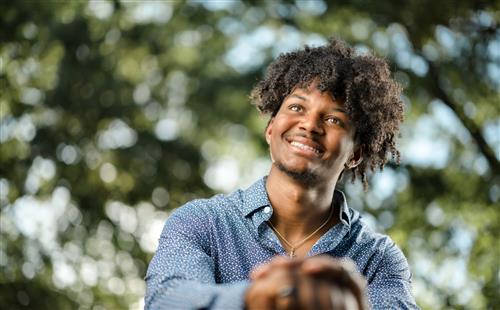 In February, at his signing announcement at Southwest Guilford High, Joey fielded a few questions.

One was about what advice he’d give eighth-graders and other high school students. He had an idea.

“Stay dedicated, stay focused,” he said. “It’s going to be a journey no matter what route you choose. As you get older, naturally there will be a lot of avenues that could take you down the wrong road.

“But if you keep your head straight and stay focused on your goals, you can achieve whatever you want.”