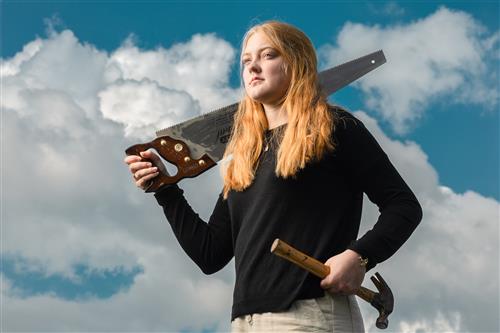 Lindsey Cockburn got a plunge cutter for Christmas.

It’s a small saw used to cut out details in wood, and she really learned how to use it at Weaver Academy. She’s also built sets, tiny houses and a new home in east Greensboro following a destructive tornado four years ago.

After graduating from Weaver Friday, Lindsey is bound to the American College of Building Arts in Charleston, S.C. She was one of 25 students selected for the incoming class, and she’ll major in plaster restoration.

Lindsey will specialize in working on homes older than her grandparents and great grandparents. She sees these homes as artistically beautiful and distinctive monuments that can define a community and undergird the history of a nation.

Lindsey learned all that at Weaver. But the knowledge and wisdom she gained came after a tough twist of fate.

Lindsey looked in the mirror. Right then, her life changed.

She was 14, sitting in a diner with her parents near a mirrored wall when she noticed how enlarged her neck had become.

“That’s weird,” she told herself.

Her parents took her to the doctor, and she was diagnosed with Graves’ disease, an autoimmune disorder that affects one out of 100 Americans. It attacks the thyroid gland and affects everything from how well someone sees to how fast their heart beats.

It happens because Graves’ disease causes the thyroid, the butterfly-shaped gland in the neck, to make more hormones than the body needs.

Lindsey received the diagnosis right before enrolling at Weaver. Doctors removed her thyroid, and because of her condition, Lindsey had to postpone her physical education class her freshman year and rethink her entire class schedule.

Lindsey wanted to study acting or stage management. But because of her Graves’ disease, doctors worried those courses could tax her body too much. The only class available that she could take was an introductory course in building techniques in residential construction.

She enrolled, and she knew she’d like it. Building things was in her blood. 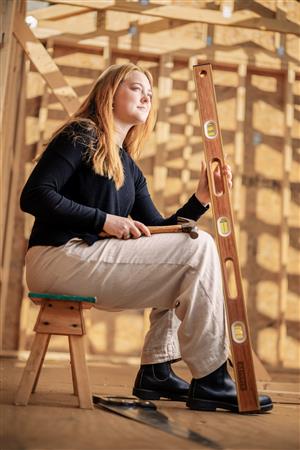 For years, she had helped her dad with his personal building projects. That includes building a shed in their backyard. Then, there is the mountain cabin in northern Georgia where she spent her summers. Her grandfather, a carpenter, built it and enlisted her dad as an apprentice.

So, taking a carpentry class didn’t scare her at all. It excited her, particularly during one of the most vulnerable times of her life.

“It was a major life change,” Lindsey says today. “You’re diagnosed with a disease that doesn’t have a cure and affects you not only physically, but emotionally and mentally as well. Then, on top of that, you’re starting at this new school, you have no friends yet, and you’re at a new point in your life.

“So, I was trying to find something that I was good at, that I could feel my artistic self again. That’s when I found carpentry. It made me feel very safe and comfortable and helped me connect to the place where I am today.”

“It reminded me of everything I was capable of,” Lindsey says. “I wasn’t just another person in the crowd. I was a young woman in a trade who could do it just as well as anybody. I was doing something I was good at.”

‘A Day of Pure Happiness’

He makes his students comfortable by cracking jokes and giving them nicknames as he shows his students the tools and the techniques of construction in the five courses he teaches at Weaver.

Lindsey took multiple classes with Adkins over the years.  She didn’t have a nickname. She was just “Lindsey.” She became one of his best students, and like he does with all of them, Adkins encouraged Lindsey to stretch her skills and overcome her fear with any project.

Lindsey did just that. She helped design sets prices for the theater department’s shows at Weaver, and she tackled class projects such as building a doghouse and framing a new house in Greensboro.

At Weaver, Lindsey discovered she was a lot like Grandpa Ott Lindsey, the carpenter. She loved carpentry because it tapped into what she loved to do –– being outside, using math to solve problems in a trade that felt like one big puzzle.

“Simple math like geometry always gave me a lot of joy,” Lindsey says.

She discovered the American College of Building Arts by watching episodes of the popular PBS show, “This Old House.” Then, as a junior during spring break, she and her parents toured the school. Afterward, Lindsey knew right away.

“This is my top school,” she told her parents.

Lindsey applied last fall. Adkins wrote her a letter of recommendation, and while taking her carpentry class her senior year, she got the call from the school right before her winter break. She got in.

“It was a day of pure happiness because I do believe something put me on the path I was on,” she says today. “It could be God. It could be fate. It could be just the way the world works. But whatever it is, I’m just happy. And what makes me happy that I believed in myself. I trusted my heart.” 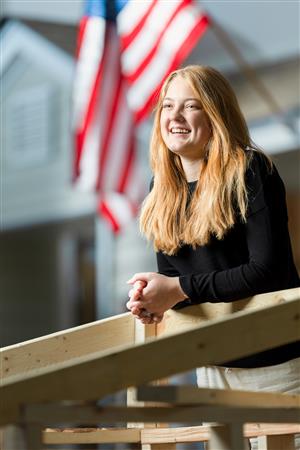 This fall, she’ll study plaster restoration at the American College of Building Arts because she wants to renovate historic homes. And in Charleston, S.C., where the city’s architecture dates back to the 16th century, Lindsey will find history on many corners.

“Working with plaster honors the people who formed it, and I think working on old homes is not only beautiful, but from the trim to the molding to the layout, these homes are a great connection to the history of artistry itself,” she says.

“I believe historic buildings are monuments, and they are the foundation of how we define generations,” she says. “They are what’s here when those generations are gone.”

Lindsey sees the American College of Building Arts as the perfect school for her. Weaver, particularly James Adkins, helped her get there.

“It was a great place to learn, and I feel like if I had been in a different situation, I would not have felt as comfortable or grown as a person in the same way,” she says. “Weaver is really a special place.”