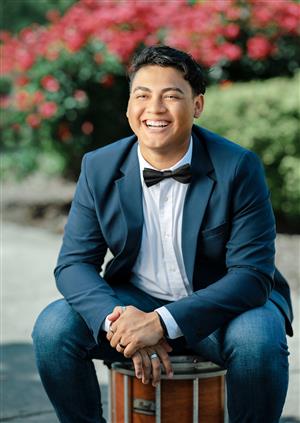 He’s a star gazer, and he likes nothing better than looking up at the night sky and imagining who –– and what –– is up there.

Cristian also likes math and engineering. As a boy growing up in Honduras, he’d take apart the little cars he received from his aunt and grandmother and put them back together again so he could figure out what went where.

At Smith High, he would finish his homework for AP Computer Science class, and in his down time, Cristian would develop computer games for fun. He’d be in the computer lab at school, in front of a screen and tell himself, “Let’s see where this goes.”

“I’m the proudest nerd you’ll ever see,” says Cristian, his voice rising. “But I got style.”

His style comes from the Smith High drumline. He’s the captain, and after three years in the drumline, he can speak the rhythm like a scat singer in jazz band.

Cristian graduated Saturday from Smith High and will continue his education at GTCC this fall. He wants to transfer later to a university, study cybersecurity and go into the military. He doesn’t know yet. But he does know why. 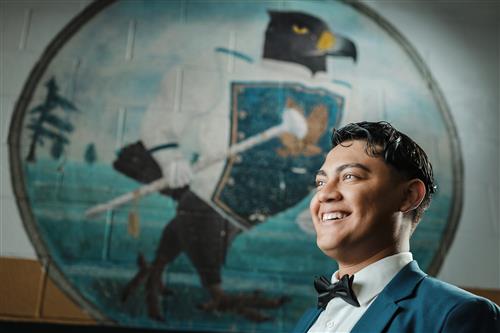 When he was 11, Cristian arrived in Greensboro from Honduras. He came with his mom, Vanessa Martinez, and his two younger sisters. Their journey was quite an odyssey.

“What I remember is out of nowhere my mom started selling everything,” Cristian says. “Bed. Refrigerator. TV. Everything. Then, one day, she told me, ‘You’re not going to school today,’ and the next thing I know we’re getting on a bus.

“I asked her why, and she told me, ‘It’s getting too dangerous here, and we’re going to look for a better future, one that’s full of opportunities for you, me and your two sisters.’ After that, I went to sleep, and the next thing I know we’re in Guatemala.

His mom wanted to take her family out of the country because of the danger around them and the hardships they faced. Even as an 11-year-old, Cristian knew.

“I had friends who were into drugs and everything, and my mom didn’t let me go out with my friends,” he says today. “She didn’t want me to be influenced by that, and I appreciate she didn’t let me.”

But that’s not all.

“Growing up in Honduras, your mind grows up super-fast,” he says. “Mom, she was always honest with us, ‘Hey, we don’t have no food today,’ and you’re growing up with that mentality of not having enough or nothing at all.

‘I Wanted to Be Better’ 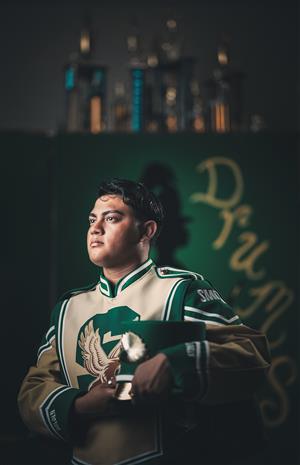 It took Cristian and his family six months to get to the U.S. border.

As they traveled north, the family would go to one city or one town, find a place to stay, and Cristian’s mom would find a part-time job for a few days or a few weeks. She’d earn enough money to rent a place and buy a bus ticket to the next town.

Cristian and his family leap-frogged across Mexico like that. He never questioned why.

“Mom always said, ‘If we come here, to the United States,’ we’ll become better people,’” Cristian says. “I was 11, and I wanted to be better. I believed her.”

They arrived in the United States in January 2017. Cristian’s grandmother and his aunt –– his mom’s mom and her mom’s sister –– helped. They lived in Greensboro, and they had sent them money when they lived in Honduras and during their six-month journey.

When Cristian and his family arrived in Texas, his grandmother and aunt sent them money to buy bus tickets.

Cristian and his family spent three days and three nights on a bus. They arrived in Greensboro at night and stayed in a hotel. The next morning, Cristian woke up, looked out the window and got scared.

He saw white everywhere he looked. Cristian had never seen snow before. And he was in a place they only dreamed about.

The next day, his grandmother and aunt moved everyone into their rental house, and Cristian started as a seventh grader at Doris Henderson Newcomers School. His English improved there, but really got better when his family got WiFi and cable two months after moving into their apartment.

Cristian started watching “The Flash,” a cable show about a crimefighter with superhuman speed. The show became his tutor.

After Newcomers School, he transferred to Jackson Middle for eighth grade and then started at Smith High. He found school to be hard. Everyone was talking, as Cristian says, “super fast.” But he knew he couldn’t fall behind. He had to catch up.

It’s because of his sisters. Rossy and Genesis kept him motivated.

“I kept asking myself, ‘Am I good enough?’” Cristian says today. “But I heard my sisters say, ‘I want to be like my brother Cristian,’ and I knew I had to be better.”

For The Love of Rhythm 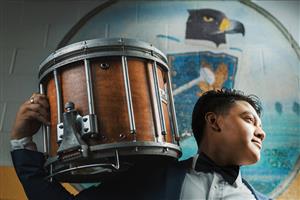 Cristian tried out for Smith High’s drumline his sophomore year - and he had never picked up a pair of drumsticks in his life. But he heard the school announcement about tryouts, and he remembered how much he liked the bands he saw at the big carnivals in Honduras.

Cristian tried out, and he wanted to play snare. No, the band director told him. He wanted Cristian to play the tenor drum.

“I thought that was all whacked,” Cristian says. “But I fell in love with that drum. The tenors are the dancers of the drumline. The basses are always on the beat, they’re always predictable. Snares are chopping on the beat. The tenors, though, they’re in the middle. You can hear them because they’re in that sweet spot.

Cristian was eventually moved up to snare, and today, he plays both snare and tenor. But that’s not the biggest deal with the drumline. Last summer, Smith’s new band director, Donte Robinson, selected Cristian to be the drumline’s captain.

“When I became the drumline captain, my English got better,” Cristian says. “I had to give information to the leadership above me, and I told them, ‘I got this. I won’t let you down.’”

“I also had to give information to our drumline. I’d tell them, ‘I want you to play this and this and this.’ I knew if I didn’t transmit that information well, the drumline, I knew, wouldn’t work.” 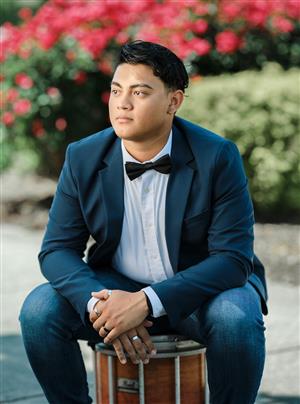 Because of the drumline, Cristian became a better leader. He also became more disciplined and focused on his future. He knew he was going to go to college. But to study what?

He thought about aerospace engineering because he loves space. That’s why he loves Saturn, a planet nine times wider than Earth that helps protect Earth from asteroids.

“The gases around Saturn save us from getting bombed 24/7,” Cristian says. “So, I see Saturn as a big brother. That’s something I never had.”

Other than aerospace engineering, Cristian thinks of being a pilot or an engineer or the owner of his own business. He has lots of ideas. But his ideas all revolve around helping others.

Ask him about that, and he wants to do for others what Rosa Martinez and Yocelin Chacon and his mom did for him. Martinez is his grandmother, Chacon is his aunt, and Cristian sees how their assistance has helped prepare him for life after Smith High.

“Graduation from high school is cool and all, but I want to keep going,” he says. “I want to find something to study deep so I can reach another goal and then another goal. My next goal is to go to college. I don’t want to fail in life.”