Angel Thomas will soon have her own set of wings.

Her academic achievements helped her earn three scholarships. Combined with the financial help from Duke University – her dad’s employer for the past two decades – she’ll be able to cover nearly every college expense.

Over four years, Angel will receive at least $200,000 and help her with going after her own dream -- becoming a commercial pilot and owning her own airline.

That financial boon will coax anyone to believe her first name fits. She does have angels watching over her, people tell her.

But listen to her story and hear her tell it in painstaking detail, and anyone will realize that angels have watched over her forever.

She starts her life story with these five words:

“I was supposed to die.”

Angels Finds Her Past

In the local newsrooms of Greensboro, Angel was first known by another name: Baby Doe.

Hours after she was born, Angel’s biological father stuck her under an apartment stairwell near the old Carolina Circle Mall.

At around 5 a.m. that day, Toni McNair was heading to work when she heard the whimpering of a kitten. No. Wrapped in a bed sheet decorated with cartoon figures from the Disney movie, “Anastasia,” was a newborn.

“I always cry,” Angel says today about telling her story. “I had hypothermia, and my umbilical cord was still attached, and after talking to my biological mother – my biological father is incarcerated – she told me he was going to kill me and discard my body so he wouldn’t have to deal with me.

“She talked him into placing me somewhere. But she didn’t ever know if I was alive or not or even if I was OK.”

McNair saved her. So did Carrie Thomas.

Thomas, a foster parent, adopted the newborn and gave her a new name. She had been known as “Caroline” because she was found near Carolina Circle. But Thomas felt another name was more appropriate.

No one really knew Angel’s entire story until WGHP broadcast a follow-up last summer and unveiled the happy ending to a gut punch of a tale.

Through the WGHP broadcast, Angel found McNair and her biological mother. Angel also visited for the first time where she was left to freeze on a cold morning in November 1999. 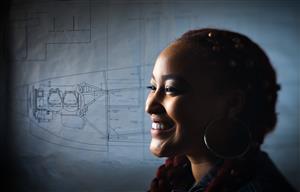 WGHP found out about Angel’s story because she began telling it at confidence-building forums for area youth.

Since then, Angel had received awards for her courage and resilience, and the more she told her story, the more she realized it helped others open up about their own past.

To reach that point, though, had been tough. Angel will tell anyone that.

She was bullied by middle-school classmates at Lincoln Academy for being adopted and abandoned by her real mom, and she went through two years of therapy to help her deal with her traumatic past.

She’s better now. She knows it.

“I feel my story has personally made me stronger,” she says. “If someone said to me today, ‘You can change it all,’ and I would say, ‘No, leave it.’ What happened made me the person I am, and nothing anyone can say to me will make me lose myself again.

“Once you find yourself, you can’t lose yourself.  No one can take that away from me.” 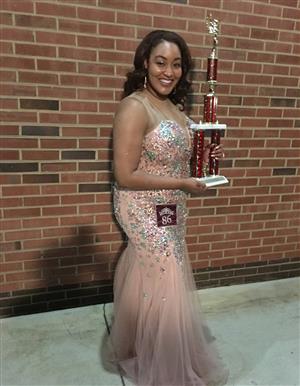 When it came to adopting Angel, Thomas says she decided immediately.

“The day I held Angel in my arms, I knew I was never leaving her,” Thomas says. “I knew God sent that baby to me.”

Thomas and her husband, Daryl, who works with Duke’s Navy ROTC department, raised Angel as their own alongside their other daughter, Shatarra, 12 years Angel’s senior.

And like she did Shatarra, Thomas encouraged Angel to set goals and go after them.

She convinced Angel to consider the Andrews’ Aviation Academy, and Thomas encouraged Angel to approach the sponsors she needed to participate in this year’s Miss Teen North Carolina pageant.

Angel did. She convinced eight Greensboro businesses to sponsor her, and in her first pageant ever, she won Miss Teen Greensboro and came in first runner-up for Miss Teen North Carolina.

When she does, she comes in with a resume full of awards she received while a student at Andrews. Here are a few: “Vivacious” Character Award, Student of Character Award, Aggie Bots Robotics Award, National Honor Society, and Service Learning Award and Diploma.

“Baby Doe has come a long way,” says Thomas, now 56. “From a timid, fragile little girl, she has blossomed into a smart, intelligent young lady. She is my Angel, and now the sky is the limit. There is nothing she can’t do.”

Angel believes that, too.