Greensboro, N.C. – Giving back to her community is a no-brainer for Sergeant First Class (SFC) Katrina McNeil. As an officer in the U.S. Army, McNeil values her service to our country and helping others reach their full potential.

With a daughter who attended Montlieu and now three children receiving their education at the school, Katrina has built valuable relationships with staff, students and parents since 2010. She visits Montlieu every Monday providing one-on-one reading assistance to a third-grade student as part of the Grand Pal Reading Tutors Program. On Fridays, Katrina loads up a cart with bags of food and delivers the 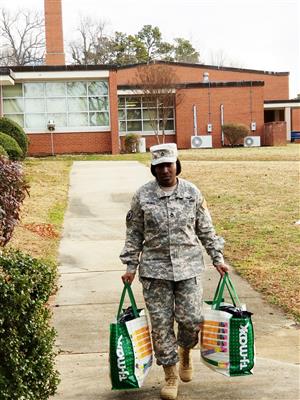 bags to students for the weekend as part of the school's Backpack Beginnings Program. Katrina regularly donates clothing aligned with Montlieu’s Standard Mode of Dress (SMOD) requirements to ensure students have the appropriate attire and seeks donations from the community. She has also served on the school's PTA as vice president assisting with fundraisers. For several years, Katrina has spent time reading with students during Read Across America Week and volunteering as a test proctor during End of Grade (EOGs) testing.

“Katrina has truly enriched the lives within the Montlieu

community through her service,” says Communities in Schools Student Support Specialist Marsha Colson Erwin, who nominated McNeil. “Ms. McNeil came to Montlieu eager to assist our students and we are so grateful for her support,” adds Shameka Byers, the school’s social worker.

As the GCS Volunteer of the Month, Katrina McNeil was presented with a $50 VISA gift card, courtesy of Rice Toyota who has sponsored the program since 2013. During the month of February, her photo will hang at the district’s central offices, Montlieu Academy of Technology, and Rice Toyota Collision Center.

Read about previous volunteers of the month here. To submit a nomination, click here.